I promise next month we will talk about Mesquite and Mesquite Furniture making. But for now it's all about making "BIG Bucks"......


Llano's Trail of the Deer herd was successfully unveiled Sunday, June 27th and Lou Quallenberg Studios contribution "Mr. Big Bucks" was finally, officially complete and off of our plate.  You would think it would be a relief to have it off the schedule but I think, just as any artistic endeavor, once completed there is a feeling of loss or "Oh no now what?"  They are our babies after all. Now we have our dining room back and our evenings are once again available for whatever or wherever the night leads us, but there is still that hole.

Our entry "Mr. Big Bucks" started out as a hundred dollar bill design, trying to play up the "Bucks" theme.  I also thought it would not hurt us to be staring at hundred dollar bills for the next 30 days. The power of visualization is an awesome power that I have seen in action many times in my life. Some skeptics may call it a coincidence that the phone started ringing and opportunities began pouring in but I hafta disagree.  I am SURE that working on this "free" community art project has been a rain maker for us. You should try it!  Get an image of money and work on a fun project with it for 30 days and see what happens. It could change your life!!

The first layer of money green was applied with the help of my sweet sister Heather Martin and my nephew Matthew Martin. We would and could have done it without them, but it would not have been half as much fun.  There was a great deal of surface to cover and  the help was greatly appreciated. Matthew also helped some with the metallic gold antlers and eyes.

After the base coat was completed we let it air dry over Memorial Day weekend - while we were at the lake.  We then moved him from the Lou Quallenberg Studios shop to the house so that I could work on him as I had the energy- sometimes late at night.

We originally thought we would airbrush the design but had to revert back to hand painting when Lou could not get the paints to work with the airbrush.  With only thirty days total to complete the project and the air brush idea out, we decided to go "old school".  Lou painted Harley choppers in the 70's so we fell back on his taping skills.  Let me just say Lou Quallenberg is amazing with tape!   There were multiple layers of tape to get all the lines in their proper places. Taping is an art in and of itself. The tape was great for all the lines but we could not really tape Ben Franklin off.

While at the lake my brother Shawn Walker cut a stencil of Ben Franklin using an enlarged version of an image of a hundred dollar bill that I created on the computer. Unfortunately  since we were at the lake for Memorial Day weekend we did not realize that the large size and sculpted curves in the deer form would not work well together.  So onto Plan B or is that C now? We decided to reduce the size of the bill.  This meant much more work for less coverage and perhaps less bang for our "buck"?

So I  used the stencil Shawn made to make a painted print on paper, which I scanned into the computer and re sized to create smaller stencils.  The first large stencil was cut out of contact paper, the smaller stencils were cut out of vellum because it was easier for me to cut them out with the x-acto knife.  More stencils were required because the vellum was less durable than the contact paper and we had reduced the size of the bill meaning more Ben's were required.

We began to run out of time and energy so the 100's were added to the four corners of the bills.  At this point we decided the look was close enough to get the point across and we moved on to adding dollar signs using stencils of different sizes. Each dollar sign was drawn with pencil and then hand painted.   The process was time consuming and ran us late into the night.  I decided to pull out the glow-in-the-dark paint and painted his ears and spots on the grass.  So YES! He does glow in the dark.

Sister Heather came to the rescue Saturday along with my teenage niece Taylor Martin.  Shawn also came in from Austin to lend a helping hand.  They all kept working on hand painting the dollar signs, while I began the Pyramid under the right eye.  Lou came in behind me taping the bricks and painting them in. We both worked on the eyelashes or glow around the eye. 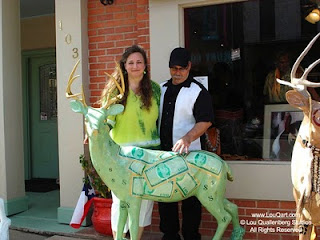 It was Sunday morning early on Father's Day and "Mr. Big Bucks" was due at T Paint and Body for his urethane gloss coat on Monday. We both  looked at each other and decided he was DONE.  We spent the day with my Dad, away from the many shades of green paint and our totally wrecked dining room/paint studio. 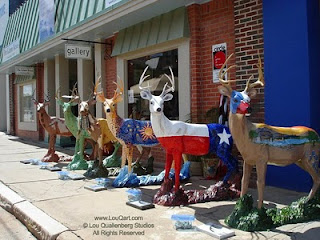 "Mr. Big Bucks" is currently grazing in front of Llano National Bank on Ford Street in Llano for the next month or so.  "Mr. Big Bucks" and the rest of the herd are available for purchase through an online, auction-style bidding process that ends February 2011. For details check with Robin  Chiesa 325/247-4963 at Circle on the square Art Gallery in Llano. ALL of the money goes to charity and the continuation of the Trail of the Deer Community Art Project.   If "Mr. Big Bucks" brings his owner/purchaser as much good fortune as he has brought us then he is really worth his weight in gold!!!
Posted by www.LouQart.com at 12:09 PM