May's Mesquite Bookshelf: “A man's bookcase will tell you everything...."

“I like to think that when I fall,
A rain-drop in Death's shoreless sea,
This shelf of books along the wall,
Beside my bed, will mourn for me.”
― Robert W. Service, Ballads of a Bohemian

The "Joanna" Mesquite Bookshelf was the first of it's kind at Lou Quallenberg Studios. The project presented it's many challenges in all aspects of design, production and delivery.  The clients were  familiar with Lou Quallenberg Studios and Lou's level of craftsmanship. They already had two pieces in their home and had mentioned the quality in a "Thank You" note that we shared part of in this: blog post.  They knew the project would take quite some time and yet they were willing to wait. Good things come to those who wait.

The project started with several sketches: one more linear design and one more sculpted and natural. They chose the Natural Sculpted Design and we think it was the right choice even with all of it's challenges and opportunities. (See original sketch above.)

In order to end up with 5/4" pieces, the process started with the slabbing of a few suitable mesquite logs into 6/4" slabs.  Then wood, from the best tree for this project, was taken to the kiln and dried for the next ninety days or so. Since the project had to be added to the busy production schedule, work was not started immediately once the wood was dried. This also allowed the wood to come back to a more natural and environmentally stable moisture content.

The cracks and holes that are such a frustrating but natural part of mesquite needed to be filled with the black epoxy that has become our partner in this process.  All very time consuming and tedious work, it is this attention to detail that makes Lou Quallenberg's work stand out.


All of the pieces and parts were then crafted and put together.  The shelves were mocked up with spaces to give an idea of the design and it's challenges. Working with these big pieces individually are manageable but once the pieces start going together the size and weight begin to create problems.
Difficult to move around and maneuver the process once again began to slow its pace.

The final sculpting and sanding process on the piece as a unit took hours and hours as it was brought to Lou Quallenberg standards. Attention to details and lovingly treating, both the back and bottom of the bookshelf and shelves, as if they would be the focal points. These are just few tricks that make Lou's work so special.

The hand rubbed oil and wax finish took a bit longer than the normal two week process due to the corners, all of the shelves and the unusual on and off wet/humid weather, but once again the process was not pushed  or rushed.


Once finished the "Joanna" Mesquite Bookshelf needed to be photographed. We usually prefer to photograph in the studio but because of size and weight, the piece was photographed on site in the shop and left in only one position. It was a challenge but we feel like it is always worth the effort. Even though none of the photographs of Lou's Mesquite Furniture never really capture the true essence and beauty that you see and feel in the presence of each piece.

“And as I surveyed the clutter of his study I was pleased to see that he was a man after my own heart. All of his money appeared to have been spent on either books or shelves to hold them.”
― Ross King, Ex-Libris

The delivery of the "Joanna" Mesquite Bookshelf was quite the process both in and of itself. All the while the threat of much needed rain hung in the periphery of our minds held at bay only by the desire to do the delivery and make it both good and right.

Normally Lou prefers to deliver in a covered trailer but this piece because of  it's size and weight, he knew would be easier if we did not have to figure out how to get it and the delivery crew through a doorway dealing with trailer walls.  This would not normally be a problem as summer approaches in the Texas Hill Country but thanks to unusual weather patterns the threat of rain (an often prayed for event) threatened to disrupt the delivery process.

“A bookshelf is as particular to its owner as are his or her clothes; a personality is stamped on a library just as a shoe is shaped by the foot.”
― Alan Bennett

We intended to help with the installation all along, but had failed to discuss electrical outlets and wall stud placement. All of which complicated and extended the seemingly simple process. Once the proper location was found and fitted. The "Joanna Mesquite Bookshelf was installed with care and screwed securely to the wall.

The screws were then hidden with Lou Quallenberg's technique. Originally designed as a Mesquite Bed Bolt Cover, the mesquite button covers are held in place with a very strong earth magnet that attracts to the metal screw. Another tiny detail that adds so much to the quality and value of a Lou Quallenberg piece.

Fortunately the rain held off until the delivery was made. The downpour made the trip back to  Llano an adventure in and of itself. Nobody complained as the land greedily soaked up the much needed moisture and the runoff left floods, damage and destruction as it carved its path through the drought stricken Hill Country.

Huge thanks go out to the delivery crew Bill Gleason and Karl Rhodes. Special thanks to Shawn Walker for his steady and constant help in shop and wherever needed. We cannot forget our master packer and in house imagineer Steve Walker.

Thanks Guys!  We could not do it without you. 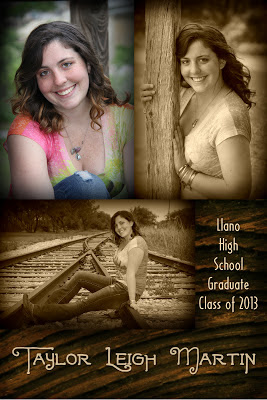 We find it quite appropriate that this end of May blog post about a Mesquite Bookshelf comes as graduates of all kinds are crossing the stage and receiving their diplomas. In fact one of our client's children was graduating the day after our delivery.


WE CONGRATULATE ALL OF THE CLASSES AND GRADUATES OF 2013!!

We especially congratulate our niece, Miss Taylor Leigh Martin as she finishes her High School education and seeks to further her education at Texas State University.  She received six Scholarships for her efforts and we applaud her for that!!!
Thanks go to the following Scholarship providers:

CONGRATULATIONS! TAYLOR!!!
We Love You!
Posted by www.LouQart.com at 5:02 PM 1 comment: