May I help you? TECHNOLOGY Love/Hate 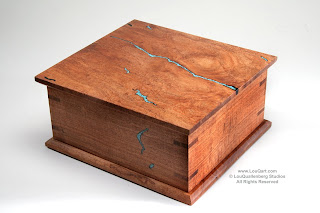 May is over and I'm not really sure where the time went. Although I suspect much of it was in front of a computer screen.

Alongside Lou's "big stuff" we have had lots of smaller and unique projects in the shop. A mesquite rug rail and a mesquite guitar stand to name a few works in progress. Lou created a beautiful mesquite with turquoise inlay box for a young bride to present a pistol to her groom on their wedding day. When the order came in from our website: www.LouQart.com, Lou shook his head and said "only in Texas." She wanted the lid to be engraved so this made us do a bit of R&D on different ways to accomplish that. 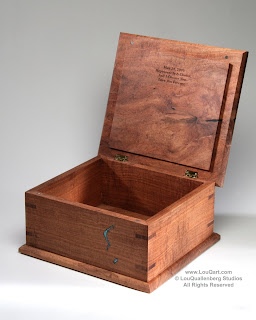 We eventually settled on laser engraving. It was a bit nerve wracking because it's a one shot deal, if it messed up then the lid would be ruined and Lou would have to start over. We had it done in Horseshoe Bay by Created For You and it turned out really nice. It is so amazing how far technology has come.

It's also SCARY how dependent we are on it. We came back from the Lake after a nice long, relaxing, Memorial Day weekend and had no internet service. Talk about a nightmare!! We spent hours upon hours on the phone with Verizon, then waited a day or so to receive a new modem which did not fix the problem!! We are both technically challenged. We have a "brand new" 3-4 year old DVD player, received as a gift, still in the box because neither one of us wants to attempt the hook up because failure would mean the old one might not work after attempting to hook up the new one. It's the old: if it's not broke don't fix it attitude.

We finally got the new modem working with the PC laptop but the Mac, our main computer was still rebelling. The ethernet was not working and it was not the modem or the cable. It began to look like we were going to have to take it to the big city and get it checked out when a friend mentioned that they went wireless and did not need the ethernet. Lou picked up a wireless Router from Radio Shack (yes we actually have one in Llano!!) I started the install process and got an error. After that I just walked away for a few hours. We had wasted hours and hours on the phone with condescending, computer geeks that reside in other countries and can only help you if they follow the computer screen prompts in front of them. Now we had invested the better part of a hundred dollar bill on a useless wireless router?!!

My FINAL attempt at wireless hook up began with another very unhelpful male, techie that I eventually hung up on and ended with a very helpful female, techie that I would have hugged and kissed if she had been in the room!! Wireless is AMAZING!! And I can't believe there is not an extra monthly charge?! I finally got the network set up on my own but I needed the helpful, female, techie to help make the network safe and secure. When she told me I could even hook up the printers I nearly cried!! Of course I won't be attempting that today, although I just might get that old/new DVD player out of the box.

This technology stuff makes everything so much easier. So now that this blog post is finally written I need to go update facebook, twitter, the website oh yeah and check ALL of our email accounts......

BTW Best Wishes Lindsay!!! We hope he liked the Box.
Posted by www.LouQart.com at 8:04 AM No comments: