The Mesquite Partners Desk made her debut in Jackson Hole, Wyoming at the 17th Annual Western Design Conference where we connected with old friends and made a few more new ones. The desk named "Good Luck" as a joke from a friendly disagreement on what is possible in design and construction, leads me to question what makes an artist successful? Is it Good Luck? Is it Talent? Is it Marketing?

We were happily reunited with Tim Carney and his wife Maureen Shaughnessy from Montana. Timothy’s Fine Woodworking is one of the artist’s Lou searched out last year and really connected with. His furniture is truly beautiful, soulful and his nature so sweet and quiet. They both give back to the world their time energy and finances. They are both so soft spoken and I think it is difficult for them to push, and stand in the spotlight of the public.

Another happy reunion was with Artist Les Powers and his wife Tauni aka BBF of Natures Forms. Les’s work is a brilliant mix of wood and stone sculpture. It is an unusual and truly original look that we know one day will make him famous. He showed up with a recovering staph infection in his hand, that had prevented him from finishing his special piece for the Show. His amazing calm as a metal lighting beam fell on and crushed one of his beautiful creations was an inspiration to us all. He is shown here gluing it back together.

Jerry Van Fleet of Legendary Heirlooms was featured in the Cowboys & Indians article that we were in. We met Jerry at last years Western Design Conference and I think he and Lou had so much fun that the WDC decided they needed to put them in opposite corners this year! We met his beautiful wife Shari this year ending the standing joke that she was a figment of his imagination. 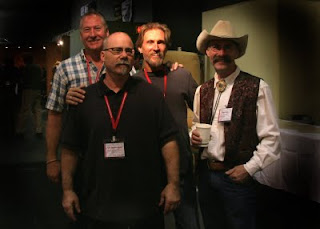 Last year we had briefly made the acquaintance of John Gallis, Mike Roth and Scott Strikwerda all of whom were in the article with us in Cowboys & Indians Magazine. It was great and inspirational to visit with each of them again.

We caught up with Scott and Stephanie Shangraw of Shangri-La Woodworks we had met them at several of the mesquite shows in Texas. They are responsible for any moose photos that Lou took, because they gave us the heads up that moose were at their campground every morning. Scott’s chairs always blow our minds. It is funny that Scott, Tim, John and Lou all three brought desks to the show and each one was so completely different. It didn't matter though, this year the judges had a thing for chairs.

Jim Branvik and the beautiful Laurie were phone and email buddies that we helped push to get into the show (can’t really take credit cause his work truly speaks for itself.) Jim is the Original Horseshoe Engraver an idea so simple and original and carried out so artistically. The horseshoes and jewelry he makes are absolutely gorgeous they are Western Bling to the hilt. We were so happy to finally meet them live and in person. We look forward to a long and lasting friendship with these two.

Lucky Star Gallery’s Harriet and Missy Allison were familiar faces that we grew to know and love this year. Their joy and excitement are just plain contagious. We hope they will spend some of their holidays in the Hill Country. Congratulations for the Best in Show Award it was a real beauty and a lasting tribute to Sonny Tuttle.

Tom Dean of Milo Creek Carving was one “big fish” that we intended to meet but had no idea we would find a comedian, marketing genius, leader and friend all wrapped in one. How his wife Patty puts up with his antic’s we will never know. She is a real sweetheart and a Physical Therapist that worried and watched over Les’s hand. I do owe Tom a debt of gratitude for adding new voices and catch phrases to Lou and Shawn’s repertoire. Just ask him if his brother has an arc welder.....

Tim Urban and his wife Cindy were first timers that we expect you will be seeing more of. Tim’s stone cut outs and inlays into the table tops are really art pieces. The amount of time and patience it takes to do this work is incredible. We expect to see him on the scene for a long time. Watch for Tim Urban's Bird Stone Furniture.

So what is it that makes an artist successful? Is just being accepted at the Western Design Conference a nod to that success? Does it require ribbons, trophies and judges? Does it take photos and articles in Newspapers and Magazines to make an artist successful? Can we call it art even though the work is not on canvas or is rarely accepted into a Gallery to be shown? Is it luck, fate, marketing or just plain old hard work? What does it take and when is it called success?
Posted by www.LouQart.com at 9:58 AM No comments: