Two Sisters from one AMAZING Tree


Lou Quallenberg was quietly approached by an unassuming man at the 2006 Texas Mesquite Show in San Angelo, Texas. The man said he had a large mesquite tree that he needed removed from his yard. “Large Mesquite Tree” is a phrase that will create lots of interest at a place like the Texas Mesquite Show. Lou had been in the business long enough now though, that he knew one man’s version of a large mesquite tree was not necessarily what he himself considered a large tree. Expecting to be disappointed he took the man’s information and promised to drive by after the show and take a look.

Upon arrival at the given address Lou and his crew knew immediately that this tree was something special. It was indeed a large tree and even more important she looked to be full of beauty and spirit. “Looked to be” being the key phrase, because the favorite saying at Lou Quallenberg Studios is “Mesquite trees are like a box of chocolates, you just don’t know what your gonna get.” This popular saying had earned it’s place time after time with both disappointment and delight. This time Lou just "KNEW". (See Lou Quallenberg's Dancing Trees.)
While the tree spoke to them of promise she also revealed that she was a very complicated woman. She was not going to be easy to take. She was firmly planted on the side yard next to the house with large looming, branches dangerously close to the home. To make the complications worse she was 150 miles from the shop, home and the many extra hands it would take to pull her free.

Two months later armed with chain saws, three trailers, six men and a local tree removal service, Lou was on his way to bringing this special gift home. It took all day and all hands working together swiftly to get her loaded on the trailers and safely on her way to Llano. Many thanks go out to Steve Walker, Shawn Walker, Terry Martin, Karl Rhodes and Bill Gleason for their help in safely releasing this beauty from the ground. 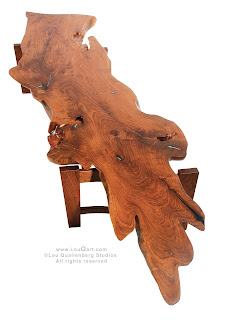 Once in Llano the next challenge was to open her up and see what treasures she actually held. This was a particularly difficult challenge since her main trunk was 38” in diameter with an s curve of about 46” and Lou wanted to keep her whole if possible. This required a saw with at least a 48”opening. None of the Mills in Central Texas were large enough to handle a tree of this size. Lou was patient and determined and finally a month later, convinced a man in South Texas to attempt to open her up. This required another road trip this time 270 miles up and back. She was really putting on the miles but many more were still to come on this journey.

She was a big gal 12 ft long , weighing in at 3500 lbs, the mill foreman had difficulty unloading her with the hi -lo and at one point his wheels came off the ground. It took a full three hours to open her up and cut her into the desired slabs. Once she was opened up Lou had his answer, she was a box of Godiva Chocolate. The trip home was full of joy, he knew he had something special in that trailer rumbling behind him. 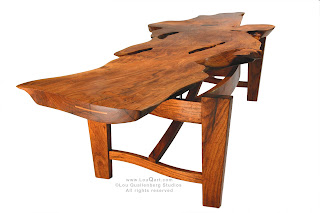 The next part of her journey involved a trip of 30 miles to the kiln for drying. The drying of mesquite is a very important step in the process. Mesquite has several beetles and bug pests that must be eradicated and if the wood is not dried properly it is susceptible to cracking and those little bugs will leave their telltale sign of fine sawdust ruining all of your hard work. This little spa vacation lasted a good 12 weeks and then she was ready for her trip back home. It was as she was being placed into position for air drying that Lou spotted the two book matched sisters and knew that they were both to be created into coffee tables. 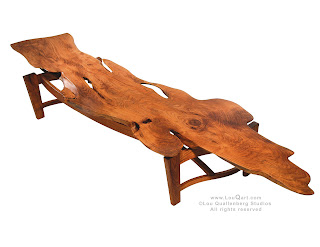 With a tight schedule Lou worked his new girlfriends in, hoping to have at least one ready for the September Western Design Conference in Jackson Hole, Wyoming. While the table tops were inspired by nature and Lou was really just bringing out the character and soul of each piece, the bases were intricately created to match the curves of each top. The bases are sleek curves of laminated mesquite, a signature of Lou‘s pieces. Each curve created specifically to match the individual curves of each top. The natural slab tops float above the curved bases on steel pins giving the pieces a natural but also unique contemporary look.
The signature laminated curves are created by slicing mesquite planks into 1/8th of an inch pieces on the band saw and then they are stacked together, glued with epoxy and placed into handmade wooden jigs. Once in the jig they are clamped in place and remain clamped for at least 48 hours. Each curve usually requires it’s own special jig. The “Sisters” each required 3 jigs per table. 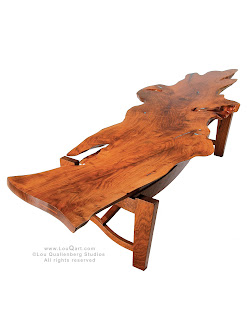 “Jackson” the more solid sister was bejeweled with inlaid accents of turquoise in some of the cracks and crevices that are characteristic of mesquite. “Sister” had more holes and sculptural aesthetic and since potential customers are always saying “Oh I love that piece I just wish it did/didn’t have turquoise in it” the decision was made not to add turquoise to “Sister” and to fill the spots with a black fresco epoxy instead.

After months of sculpting, shaping and sanding, the three week finish: a combination of sanding, oil and wax was lovingly applied. Both pieces were ready and the decision was made to take them both on the 1400 mile journey to Jackson Hole, Wyoming in hopes that they could both be shown together if space was available. Fortunately the space was found and the Sisters made their debut together that September at the Western Design Conference in Jackson Hole, Wyoming .

The trip 2800 miles up and back added a few more miles to the two sister’s journey. Seeing them together in Jackson Hole displayed in an almost yin yang arrangement caused Lou to request that the tables both be put together at the 9th Annual Texas Furniture Makers Show in Kerrville, Texas. Jim Derby the Show Director at the time, agreed that they did look good together in that yin yang and found space for them to both be shown together in the show.

“Sister” won their category “Texas Style Furniture” at the 9th Annual Texas Furniture Makers Show in December. Making it the first of a three years in a row winning streak, that Lou Quallenberg won the Best Texas Style category.    A well deserved ending to a journey from tree to table.

But that was not to be the final journey these two sisters would make. Because across the pond a new company was forming with a desire to promote mesquite around the world. This company formed in the United Kingdom was named: The Mesquite Company. They had been watching Lou's work in mesquite and had planned to visit Texas and the Texas Mesquite Art Festival in Fredericksburg hoping to find him and make contact and do business. They wanted to show his work in the UK and represent him in Europe as they introduced mesquite and mesquite flour to Europe.
An agreement was made with The Mesquite Company and Lou decided to send not one but both Sisters on this incredible journey over seas. As in the past he could not bear to separate them.  They are after all "sisters".

As fate would have it this adventure did not end with shows and accolades or even a sale. Due to an illness in the family, the owners of The Mesquite Company ended up back in Texas for an undetermined and extended stay. Therefore ending the promotion before it had a chance to take flight and get off the ground. A round trip of close to 10,000 miles is now being added to the travel tally of these mesquite beauties. 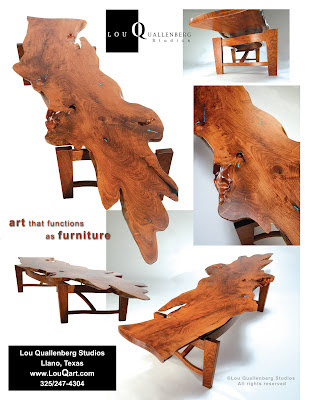 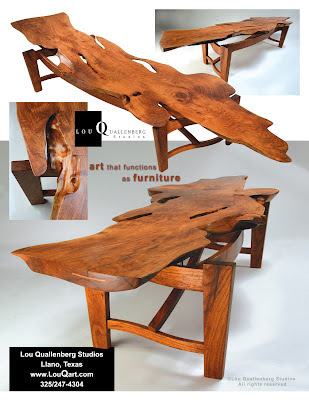 So as the US Olympic Team returns back to the US from London this month, so do these two amazing sisters. While some of the US Olympic athletes return with medals, MOST do not, but are grateful for the journey, the opportunity and the experience. That is how we feel about these two mesquite beauties. Their story remains to be told with the ending still unwritten.
Posted by www.LouQart.com at 12:22 PM No comments: