Creating with mesquite in the Texas HEAT

So when you are in Texas the talk eventually turns to the weather. We were blessed this year with a bit of spring, enough that I was inspired to write this poem:

The mesquite in spring
robed in a fine feathery lime green
hung lightly on ink black barky branches.
Whispers softly in the wind
the announcement that
spring may now begin.

Spring left us quickly somewhere back in May and the 90's have settled into the cracks and corners of the workshop. 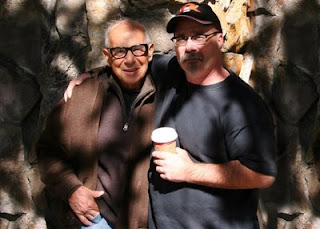 Also leaving us in May was an amazing yet quiet, humble soul: Sam Maloof the Father of Modern American Furniture Design and an inspiration to countless artists and craftsmen in all areas of design. While we did not really know of Mr. Maloof until we began our journey into furniture making, we quickly learned and had the rare opportunity to hear him Lecture and then Judge, Lou's work at the Western Design Conference in Cody, Wyoming 2006. We were told that Mr. Maloof was captivated by Lou's piece and that it was a close call for the award. Just knowing that he had touched and inspected Lou's work was the highest of honors. Sam Maloof will be missed but his work will live on to inspire many, many more.

The temperature in Llano now threatens to hit 100 degrees (Fahrenheit that is for all you Europeans) and we are only in June! Just can't bear to think what July and August will bring. So how does one, especially one of Yankee birth, deal with the heat from the hot Texas sun? Is it feasible to put in Air Conditioning? Should the new Shop hours be changed to 8pm-4am? If you have any suggestions please feel free to call us, email us or leave a comment below. 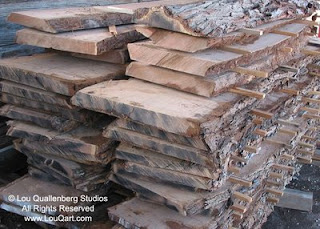 We do entertain plans for an air conditioning unit in the "next" shop and I know Lou is a night owl but not THAT much of one. Basically he just plays it one day at a time. While it goes against some old "biker code" he does wear shorts and he drinks lots and lots (of water that is.) Oh and threatens to move to some colder climate at least once a day, and when it is REALLY hot, on the hour. One thing for sure is the mesquite wood in the shop that is air drying is getting well dried. We know there is not one magic bullet to living and working in the Texas heat. You can bet that if we hit the lottery he will have a workshop that is completely climate controlled with a swimming pool just a diving board away. (Yes that would be a mesquite diving board! and of course we will still be making mesquite furniture, did ya really think we do this for the money?) But for now guess we will just have to sweat it out.

Lou questioned the use of the word "threatens" on the part where I mentioned 100 degrees and well he was right. We have hit 100+ and seem to be doing some serious record breaking (possible 105?) in the High Temperature Category!! No relief in site. Alaska anyone?

How do you beat the heat... Stick ice in your pockets :-)

Lou questioned the use of the word "threatens" on the part where I mentioned 100 degrees and well he was right. We have hit 100 and seem to be doing some serious record breaking in the High Temperature Category!! No relief in site. Alaska anyone?